Versteijnen Logistics in The Netherlands is not the only company celebrating an anniversary this year, we established our company in Hungary 25 years ago. General manager Sándor Voller has been involved since 2009 and elaborates on the growth of Versteijnen in Hungary.

Philips was the main reason Versteijnen Logistics opened an establishment in Hungary. Sándor: “Philips owned a factory near Szombathely in 1994. Versteijnen won a tender in The Netherlands to transport goods from this factory to Eindhoven, which led to the establishment of Versteijnen Logistics Hungary in 1995. At the time we only had one employee in Hungary, later we expanded our Hungarian business with more employees and multiple lorries for national transport. In those days we only offered transport. We drove internationally for Philips and domestically for other customers.”

Starting the business in Hungary was a challenge according to Sándor: “It took some time to set up the transport, due to limited freedom of movement in Hungary. Once these problems ceased, we expanded our transport. In 1998 we built a warehouse in Sárvár, close to Szombathely.” Later, when the warehouse was filled up, Versteijnen Logistics added another warehouse with offices to the venue. This became the basis of Versteijnen Hungary. 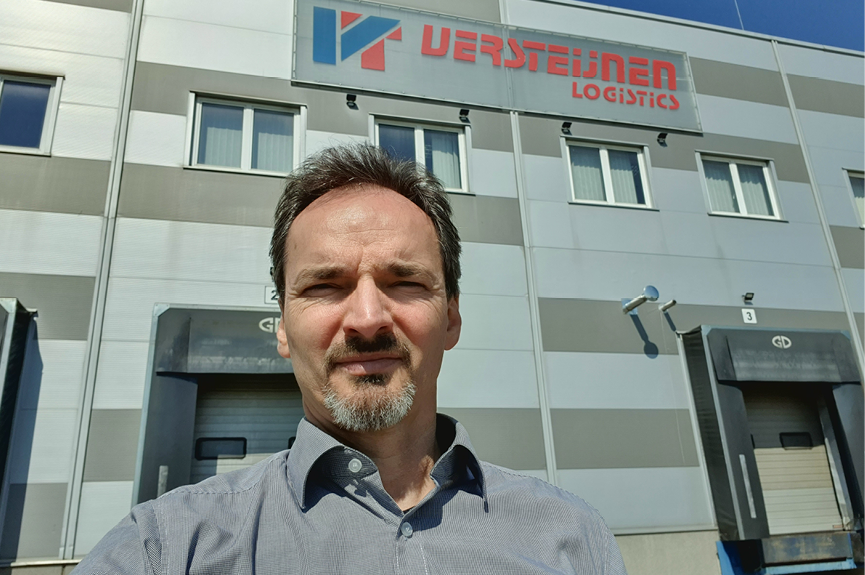 In 2004 the factory was moved to Szombathely, while the transport moved towards Székesfehérvár. Sándor: “This stimulated Versteijnen to also build warehouses in new cities.” The next step for local expansion was taken in 2008. “We opened a new warehouse in Székesfehérvár and the focus was put on transporting packaging materials, raw materials and particles. Also, we delivered parts for production to local companies.” The company grew steadily in employees.

The focus in Hungary is partly on the transport of goods from Versteijnen warehouses to factories and partners of our clients. Sándor: “Under the terms of the JIT-system we deliver their packaging and raw materials. In most cases we drive our own trucks and flatbeds.”

Next to international transport, the team of lorry drivers has also gone through some changes in the past year. Sándor: “The team expanded in a short period of time from a start-up to an important division of the company. The focus is on the direct delivery of goods on pallets, with measurements from a single pallet to 24t FTL. The goal here is to offer the client a suitable solution in a short period of time.”

Sándor has high hopes for the future. “We implemented some huge changes, particularly in international transport. This made the company stronger. We did not have any financial setbacks ever since. After 25 years we still standing on firm ground with the right mix in customers and suppliers. They have faith that we do what we promise. Besides that, I find it very important that our employees can always reach out to me. We do not have a complicated corporate structure. Our contact with the planners, customers service and the management in Holland is good as well. I hope we remain as successful as we are and I expect more positive changes in the future.”

Customer Excellence: always in search of the perfect balance